Following the work of preparation and organization conducted between 1995 and 2002, came Herri Musikaren Txokoa and after 10 years of working Soinuenea was born. 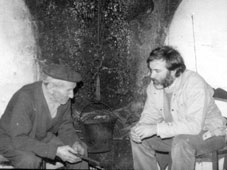 What has today become Soinuenea, began its process to be a documentation center of popular music in 1994. That's when Juan Mari Beltran prepared the project to start this Documentation Center with diverse and extensive material collected throughout his life.

After presenting the project in different organisms, it was July 1995 when, with the collaboration of the Town Hall of Oiartzun, began the task of organizing this documentation center in the building of the ancient schools of Ergoien assigned by the Towm Hall.

Once the location was fitted out, the diverse material in the collection of Juan Mari Beltran was moved there; musical instruments, books, records, cassettes, tapes, photographs and films, organizing it in the showcases, cabinets and shelves provided by the City of Oiartzun. Little by little thousands of files have been created in the databases of the library, music library, image archive and musical instruments, classifying and filing thus all materials.

In this work we have had many volunteer workers who have done much to advance this project by going outside their hours of study and work to create files in front of the computer, order materials, set up the exhibit of musical instruments and so on. Thousands of hours of work have been performed, which resulted in the opening of Herri Musikaren Txokoa’s doors to the public in March 1, 2002. Since then, it has kept them open for all those interested to come to the center.

So, always with the patronage and protection of the Town Hall of Oiartzun, we have made a successful journey of 10 years: 32,000 visitors, hundreds of consultations, 152,000 visitors on our website, 40 double concerts, 10 issues of Popular Music Conference, an organization and management of the School of Popular Music, 9 books in the collection HM Bilduma, discs, DVDs etc... And now, as a result and fruit of 10 years of working, it is time to have our own identity and entity in the foundation form. Therefore, the management of the center is in charge of Soinuenea Fundazioa. We find this period of change appropriate to give a new name and denomination to the center more in keeping with the new situation, and thus our txoko (corner) of popular music becomes the home of popular music, taking the name Soinuenea (meaning home of sound), more in keeping with its new personality.

On 22 December 2011 we presented and signed before a notary the statutes of the new foundation and from January , 2012 we fully function as Soinuenea .

This website uses cookies, both its own and those of third parties. Select the option of cookies that you prefer to navigate even its total deactivation. If you click on the button "I accept" you are giving your consent for the acceptance of the mentioned cookies and the acceptance of our cookies policy. If you want to determine what you accept and what you don't, click on "Configuration". Click on the "Read more" link for more information.
I accept Configuration